In 2016, the National Fish and Wildlife Foundation (NFWF) undertook a cooperative partnership with the U.S. Forest Service – Region 5 and the Angeles National Forest (ANF) to address the impacts of the Copper, Ranch, and Sayre Fires in a holistic way that will lead to compounded benefits for the impacted landscapes and watersheds. For this partnership, the Forest Service dedicated approximately $17 million for planning and restoration projects in the lands burned and affected by the Copper, Ranch, and Sayre fires. Amigos de los Rios received a grant to develop multi culturally appropriate signage to highlight including: San Francisquito Canyon’s Place within ‘Our Greater LA Basin Watersheds’, information on the Fire Ecology Cycle of the forest, highlight sign including Local Features, and a sign featuring the Saint Francis Dam and tragic history of this structure.

In 2018, NFWF provided Amigos de los Rios – Emerald Necklace Group with the opportunity to develop a system of signage for the San Gabriel Mountains National Monument. This signage is meant to be multi-culturally appropriate to the diverse visitors to the Angeles National Forest. We worked collaboratively with Forest Service Staff and members of the San Gabriel Mountains Community Collaborative to develop this signage for a number of key trailhead sites within the San Gabriel National Monument including trail heads at Baldy, Big Pine Areas, Crystal Lake and San Gabriel River West Fork. Signage was also created for specific scenic site spots such as Chantry Flats, Red Box, Mount Wilson, Switzer Falls and others. The signage will be translated into Spanish in situ and available in nine other languages including French, Chinese (Simplified), Tagalog, Vietnamese, Japanese, Korean, German, Russian, and Turkish digitally. The Signage will be located at key trail heads and highlight trail features, biodiversity of the area, cultural & natural history and key site’s location with Our Greater Watershed region.

Significance of the Angeles National Forest

The Angeles National Forest serves as the picturesque backdrop for one of the country’s largest and most diverse urban centers, providing access to approximately 700,000 acres of open space in the greater Los Angeles metropolitan area. Each year, the ANF hosts over 3.5 million visitors, giving them the opportunity to explore a variety of landscapes including chaparral, oak thickets, high desert, pine woods, steep and rugged mountains, and numerous lakes, streams, and rivers. The first national forest in California, the ANF is located within one of the world’s vital biodiversity hot spots, and contains many natural and cultural resources unique to Southern California. It is home to a variety of wildlife, including the California condor, spotted owl, bighorn sheep, and numerous threatened and endangered species. The watersheds of the ANF support the natural environments within the boundaries of the Forest and are also the source of one-third of Los Angeles’s drinking water, and the eighteen dams and debris basins support a massive flood control system to protect and provide for the millions of people that live downstream. 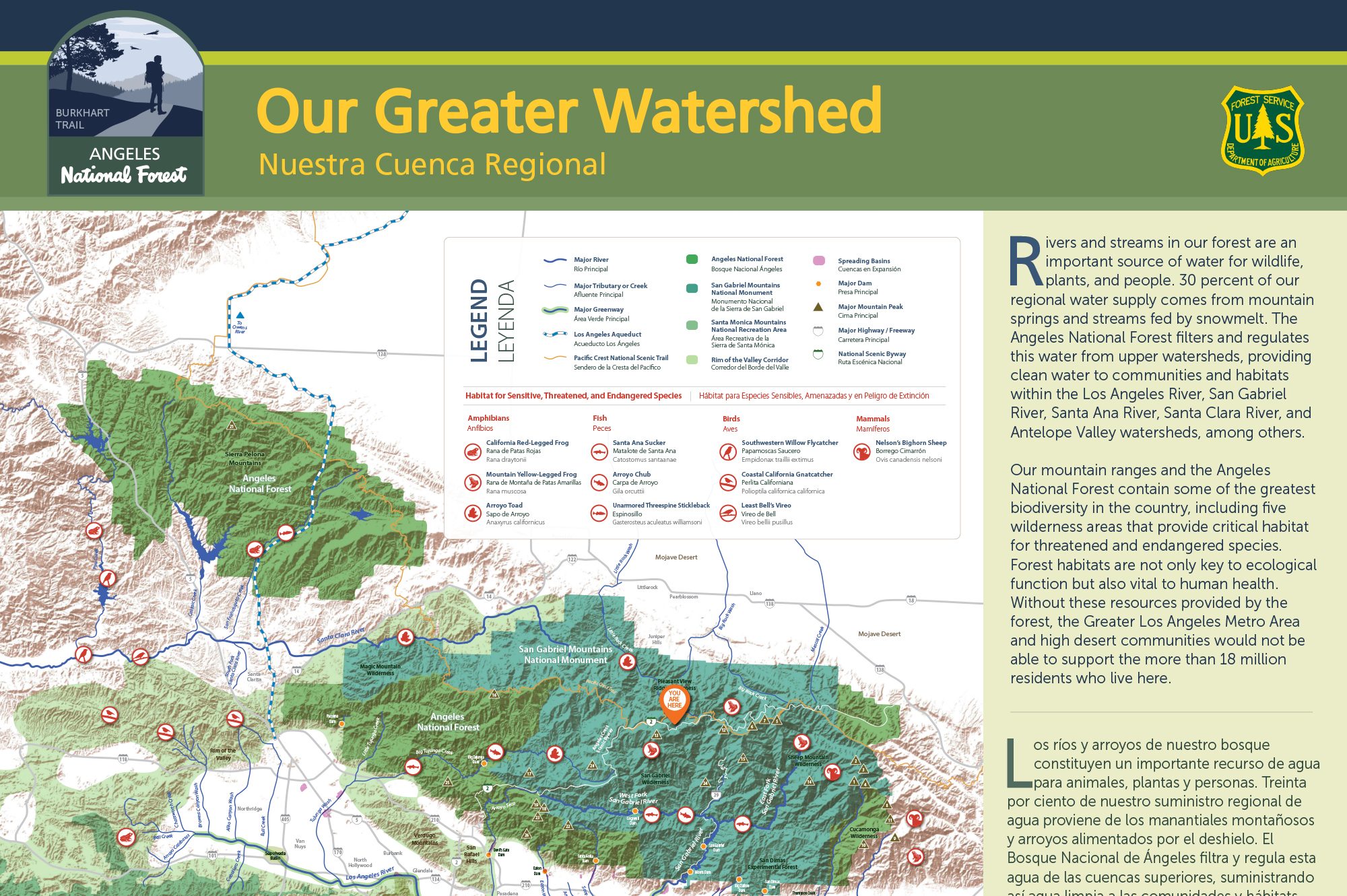 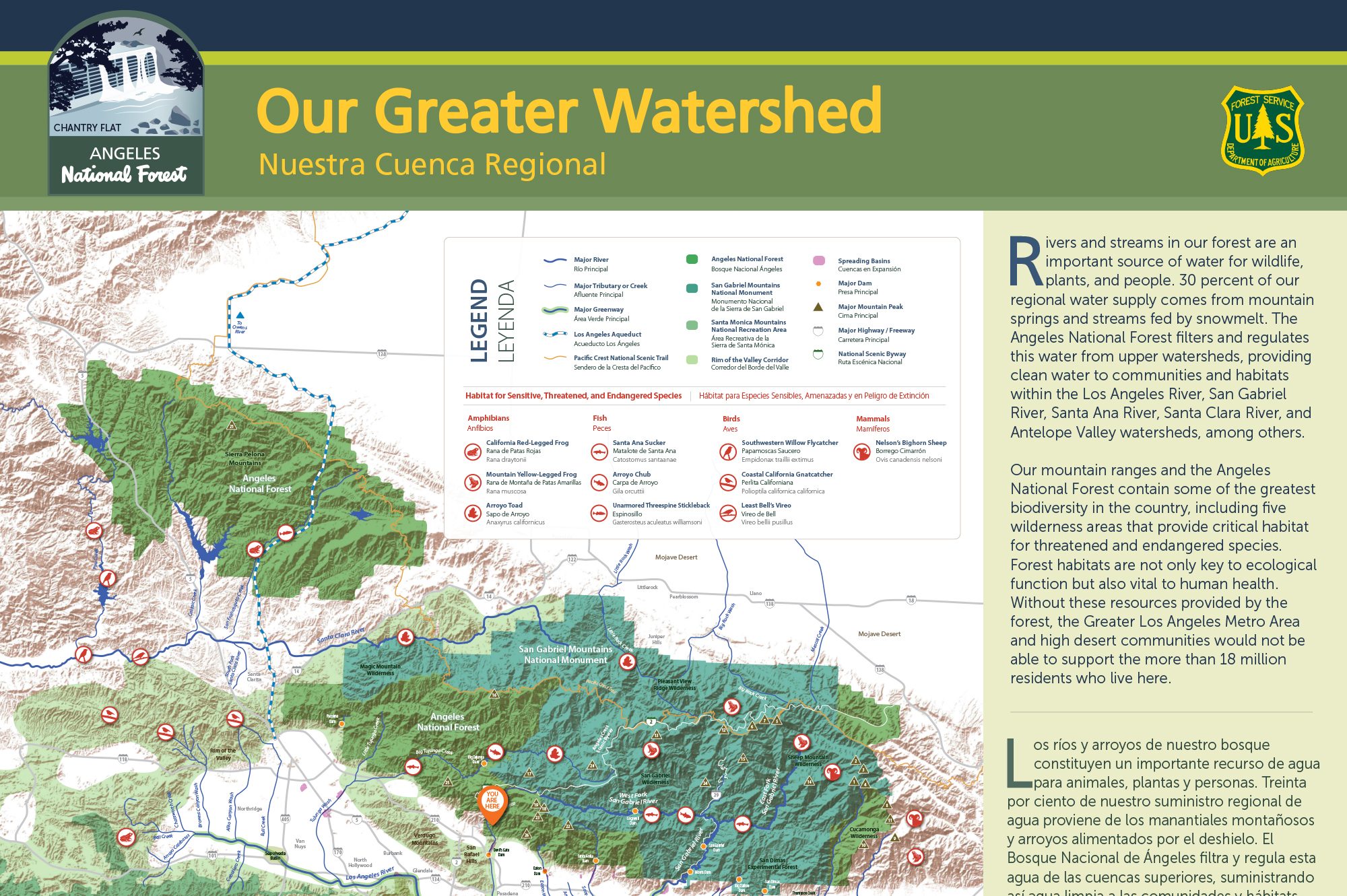 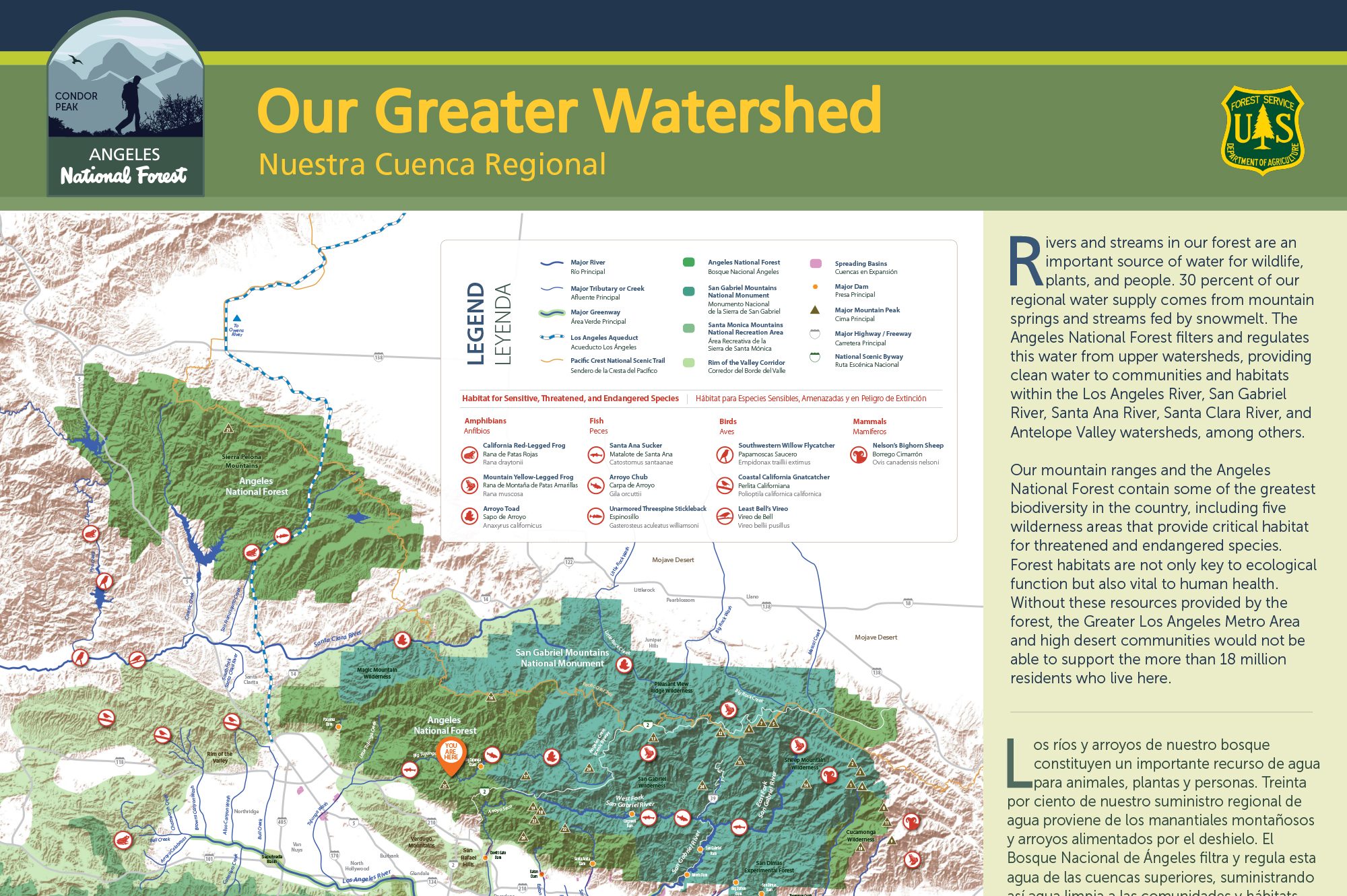 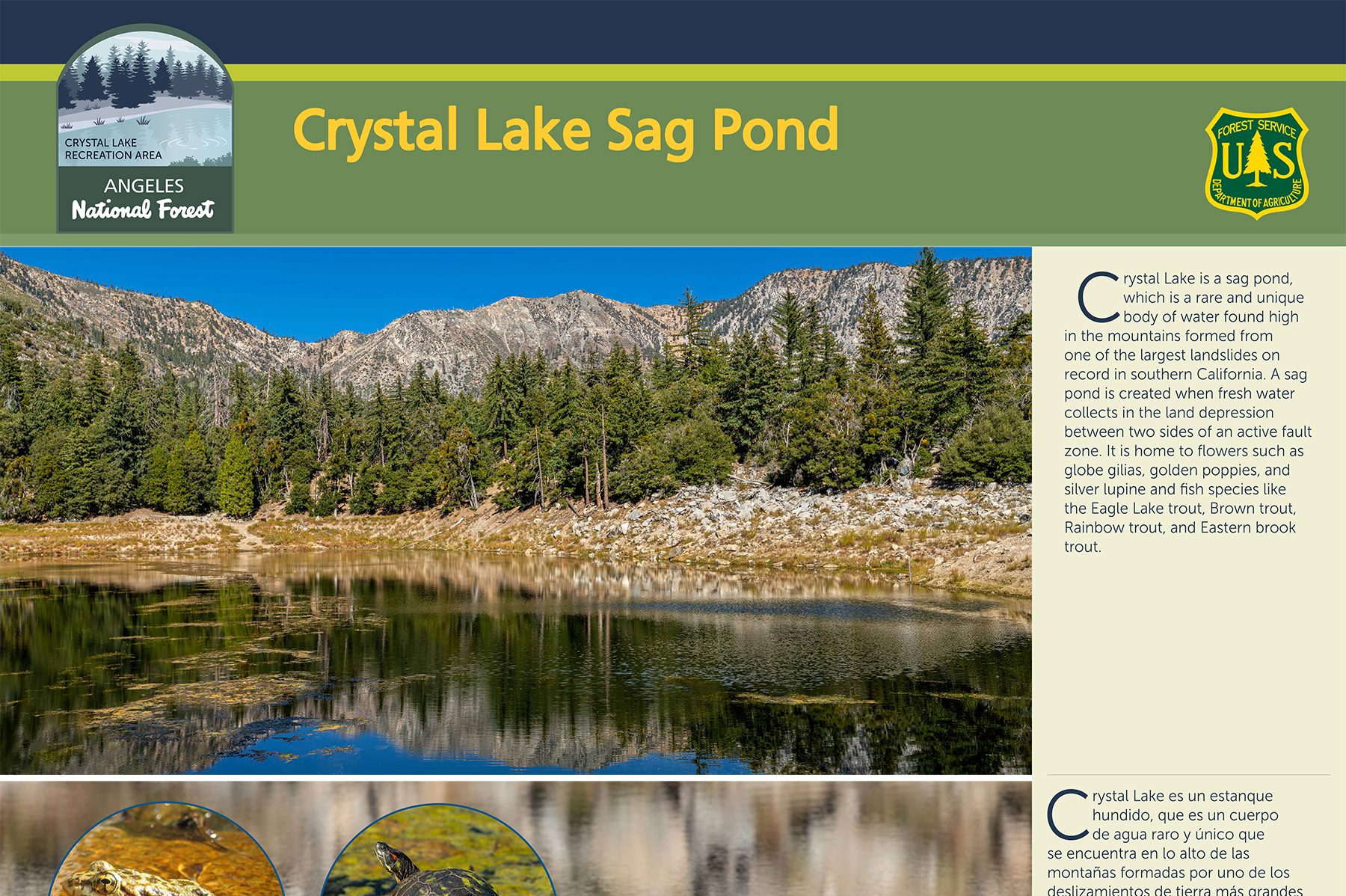 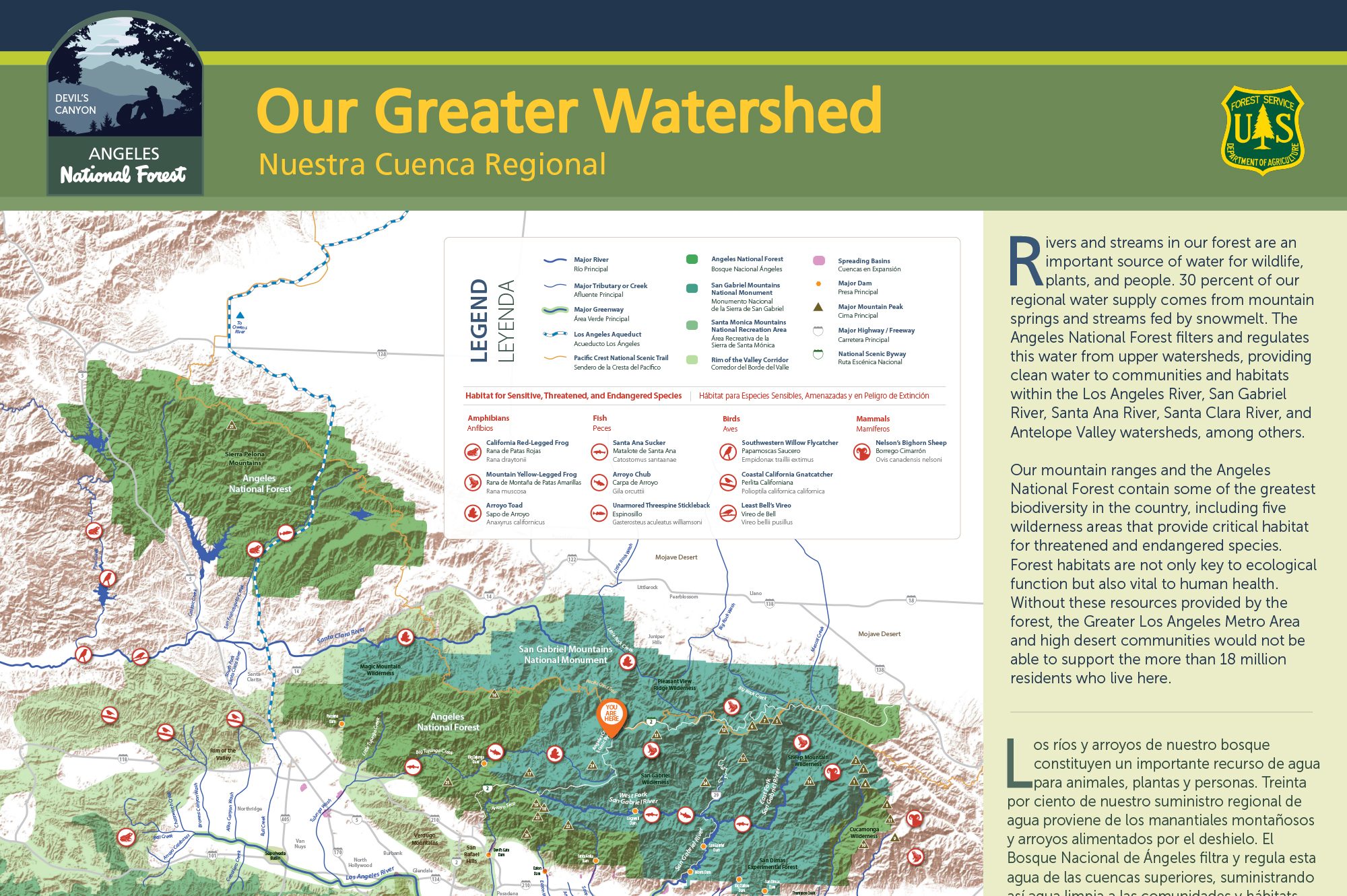 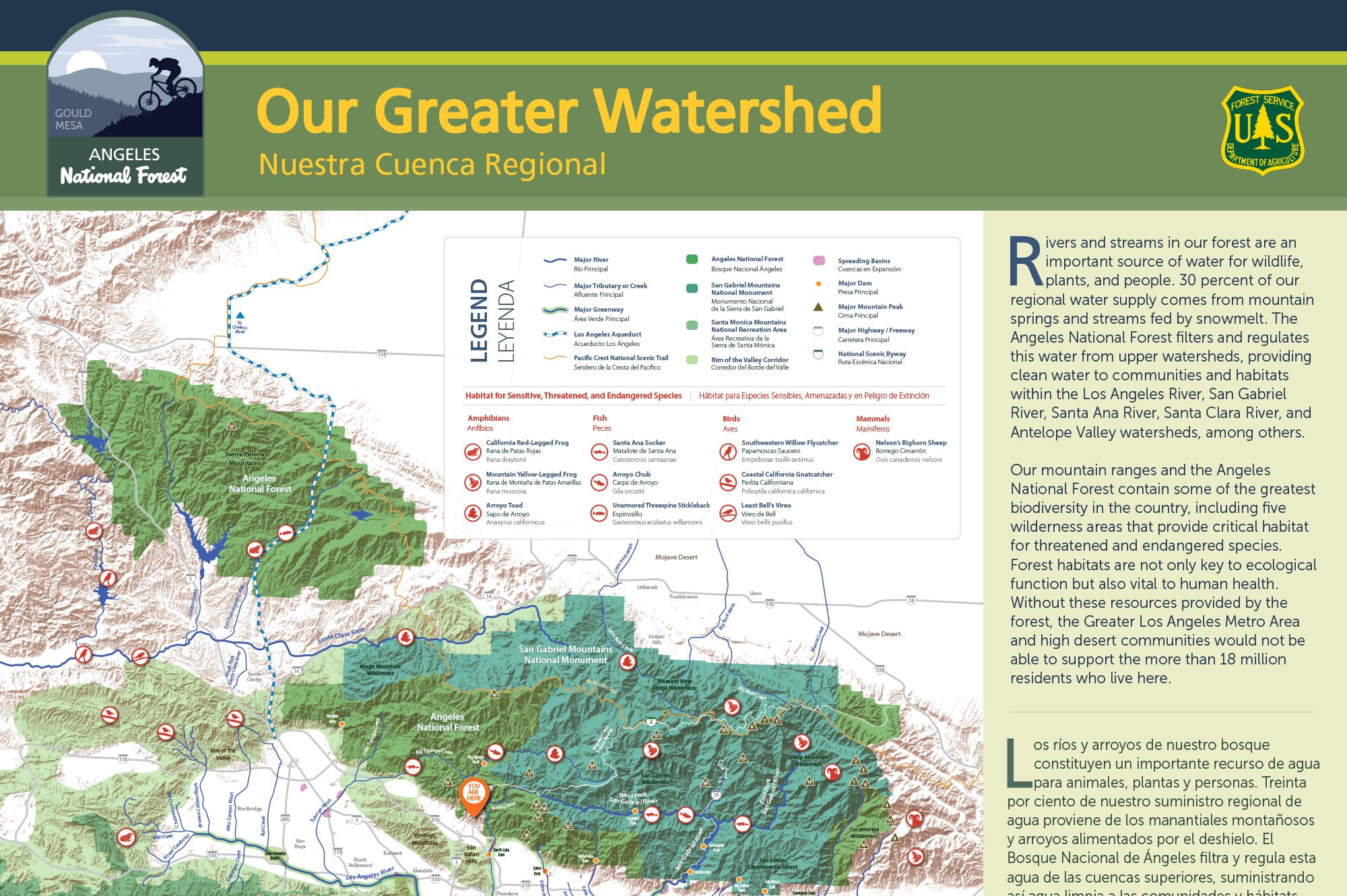 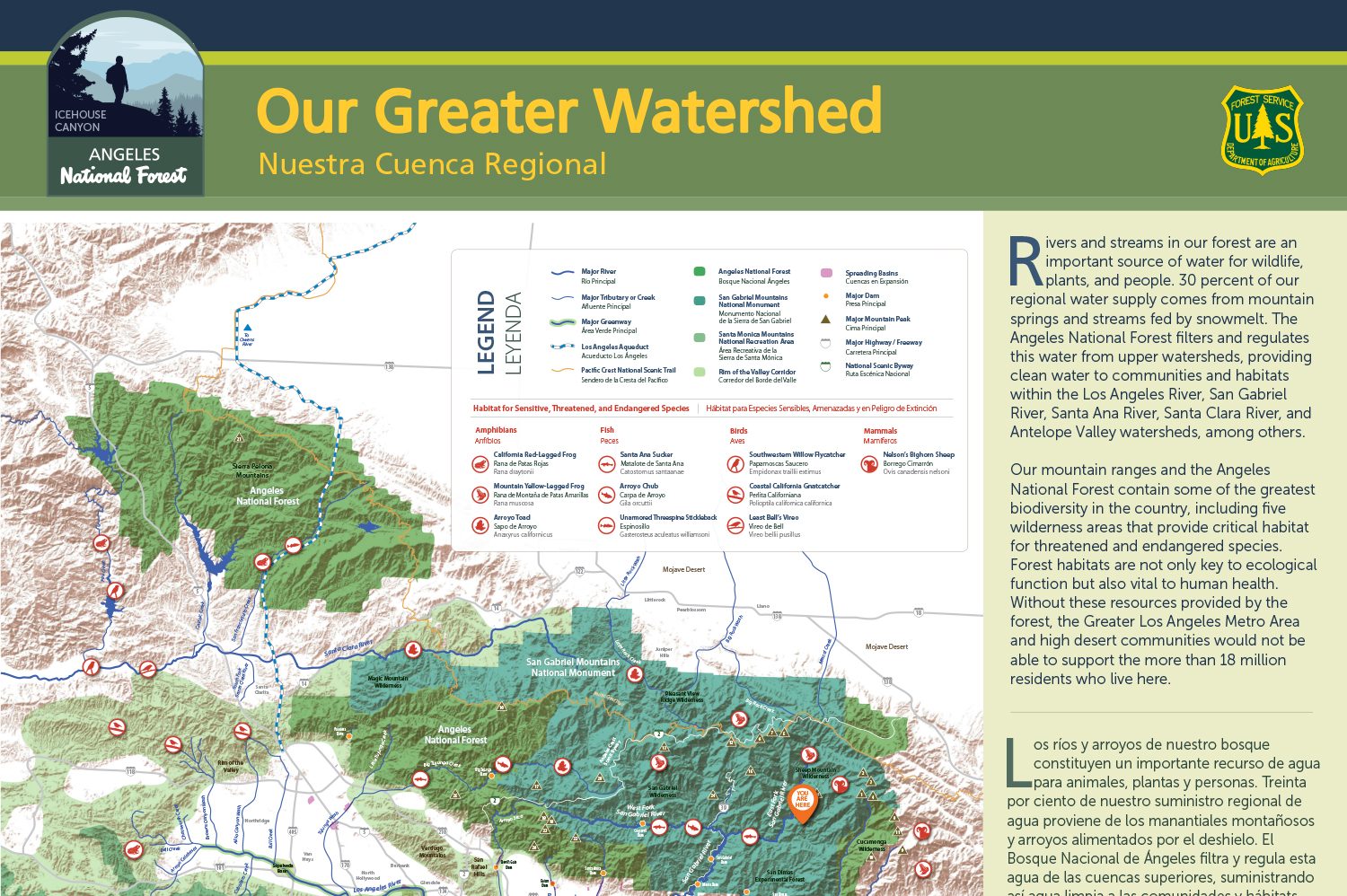 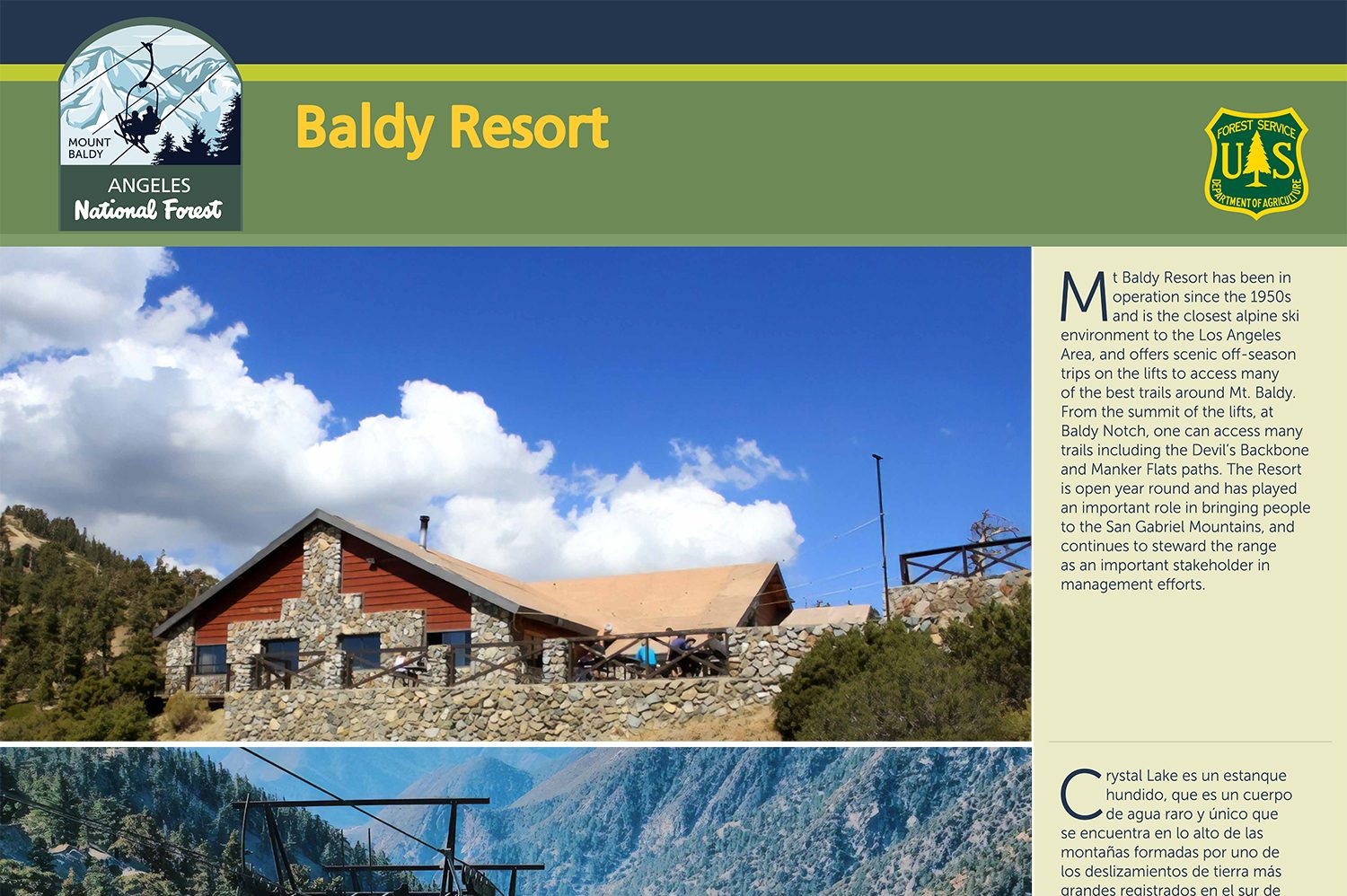 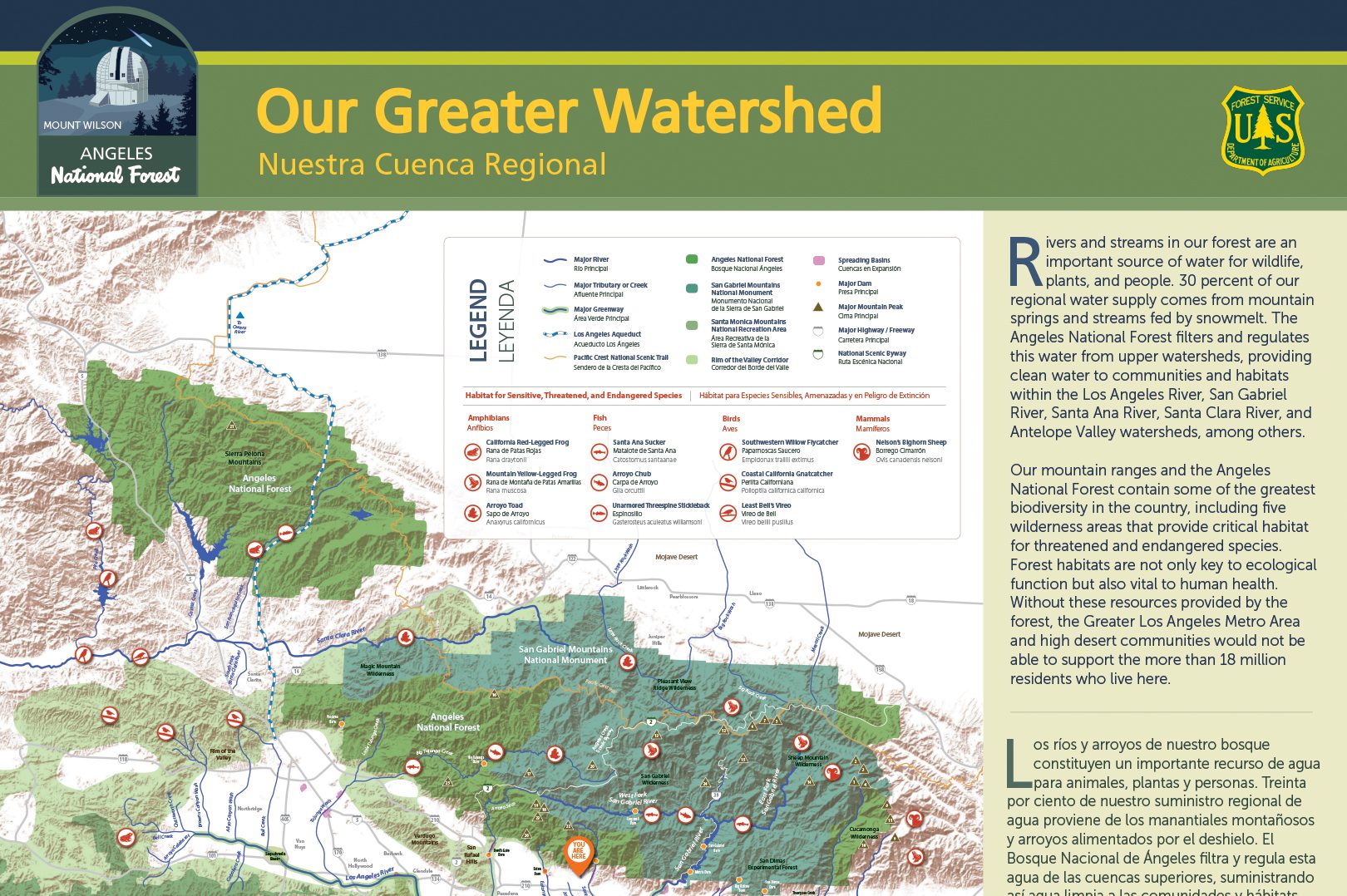 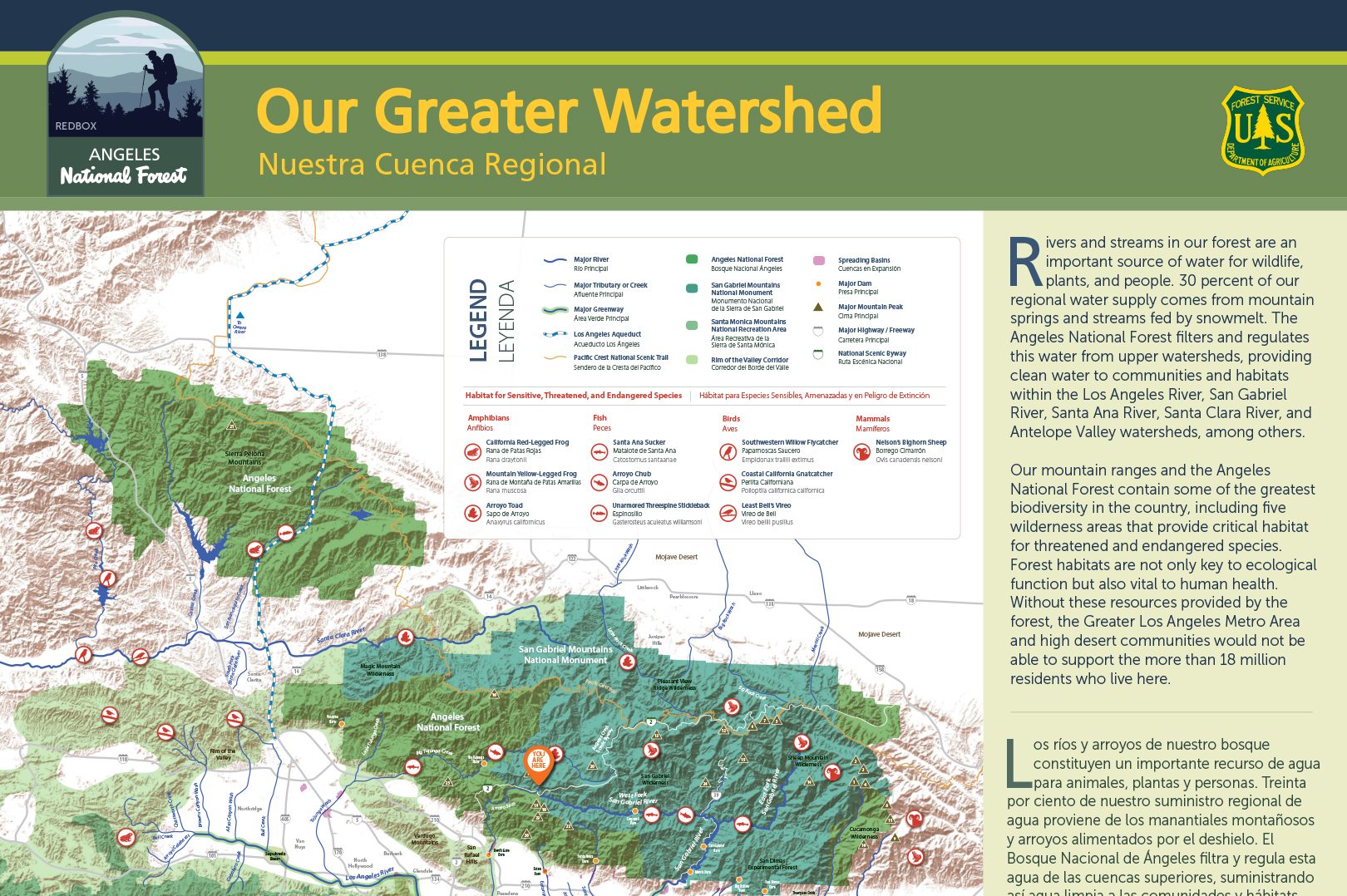 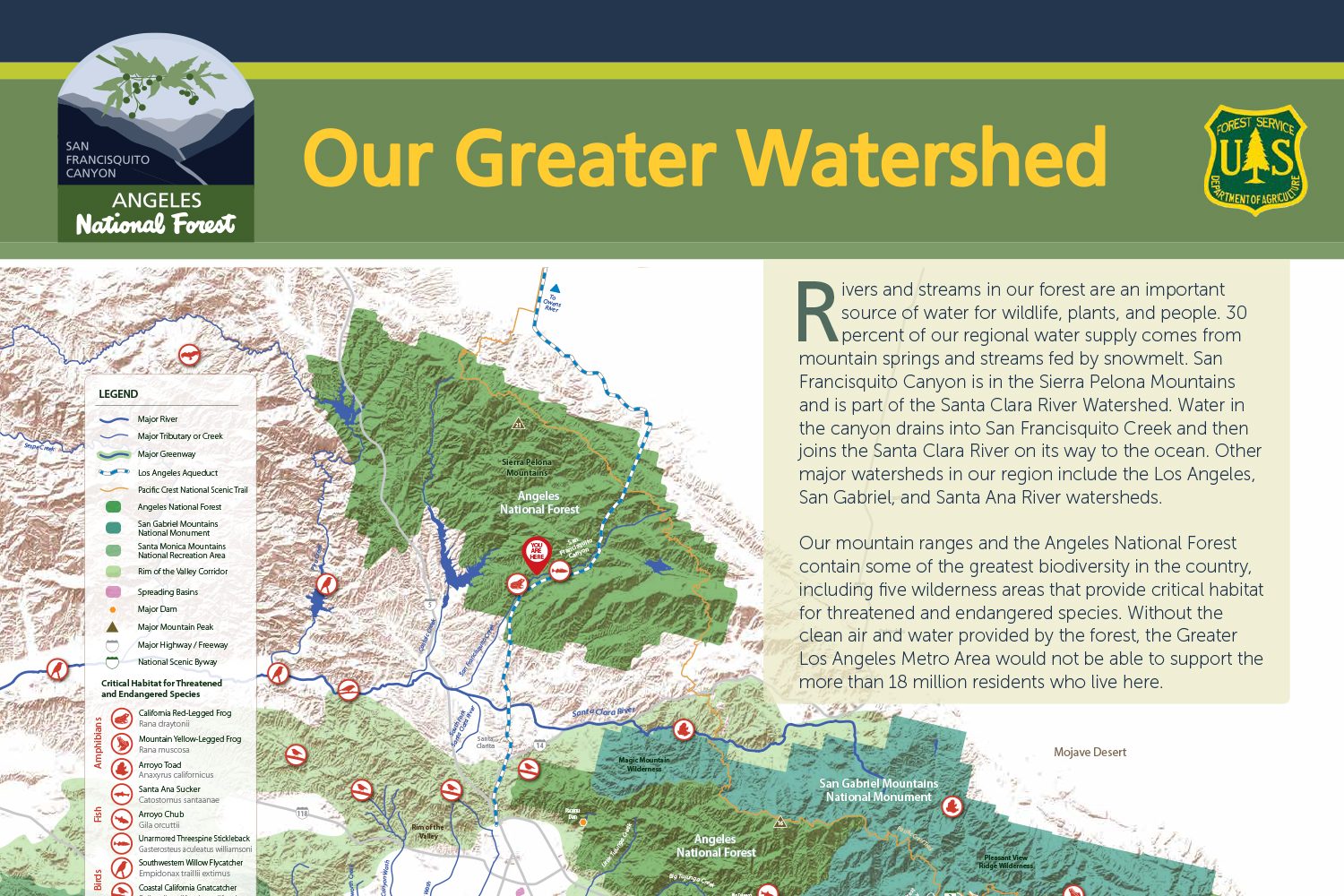 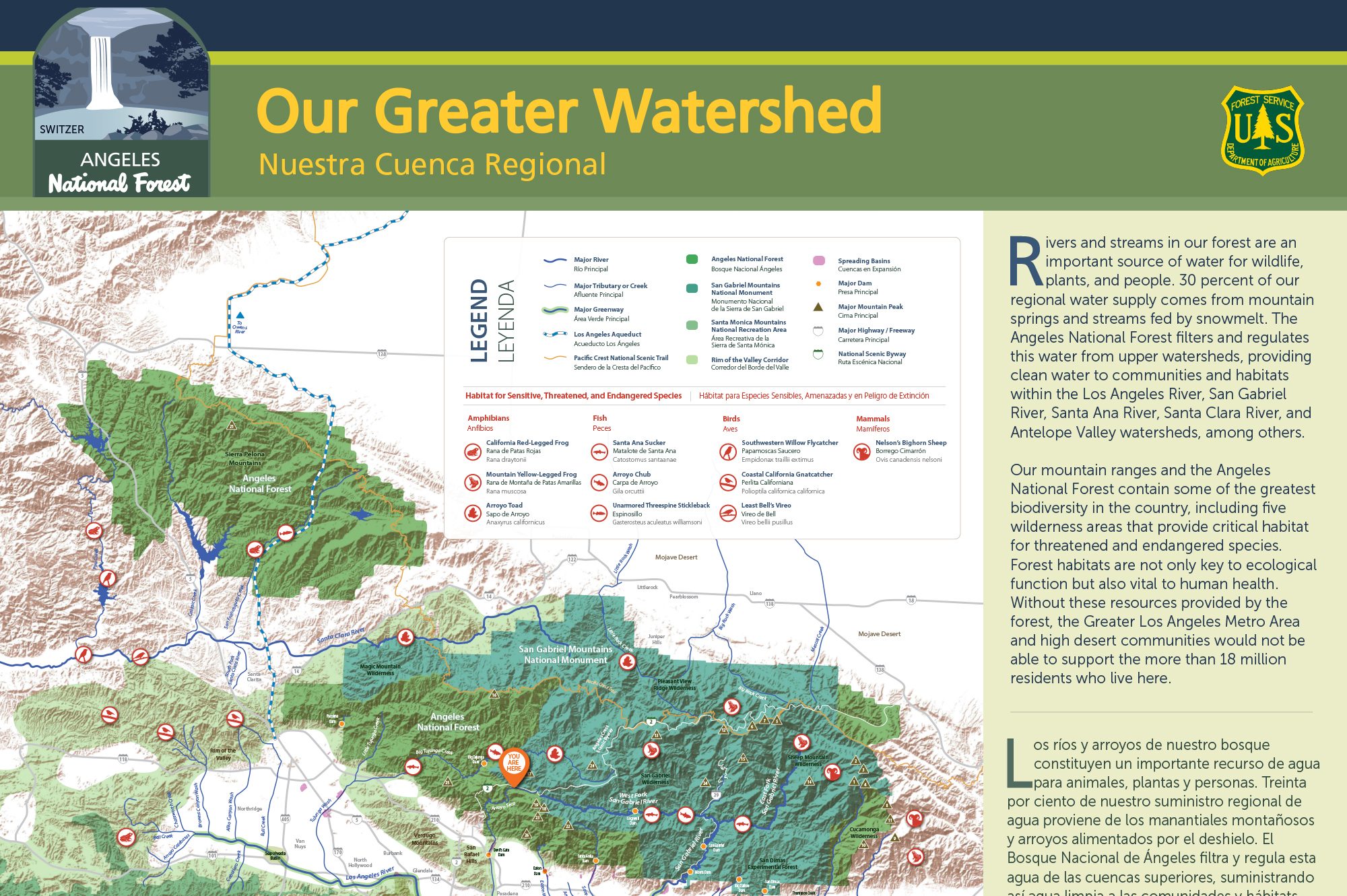 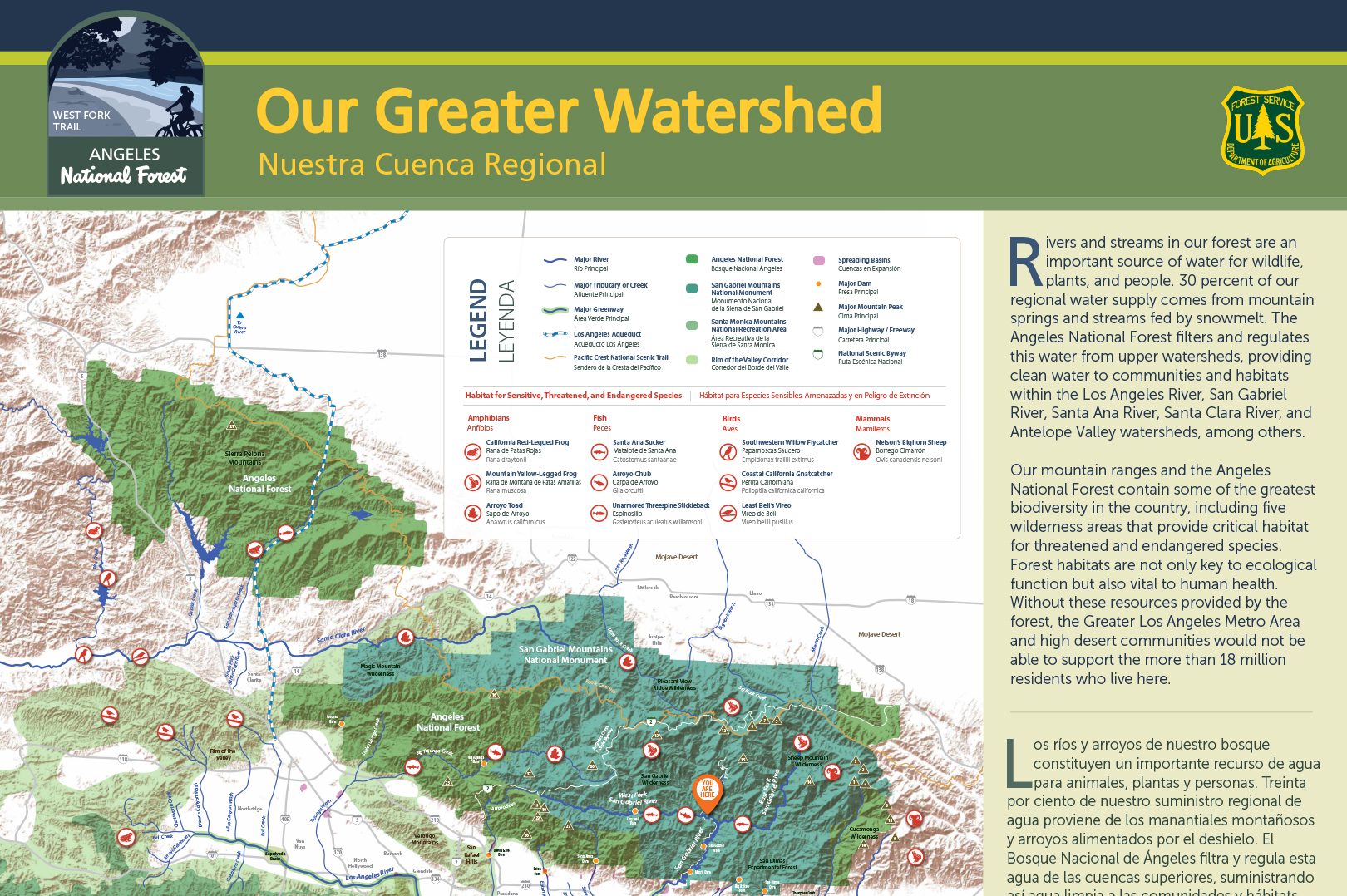 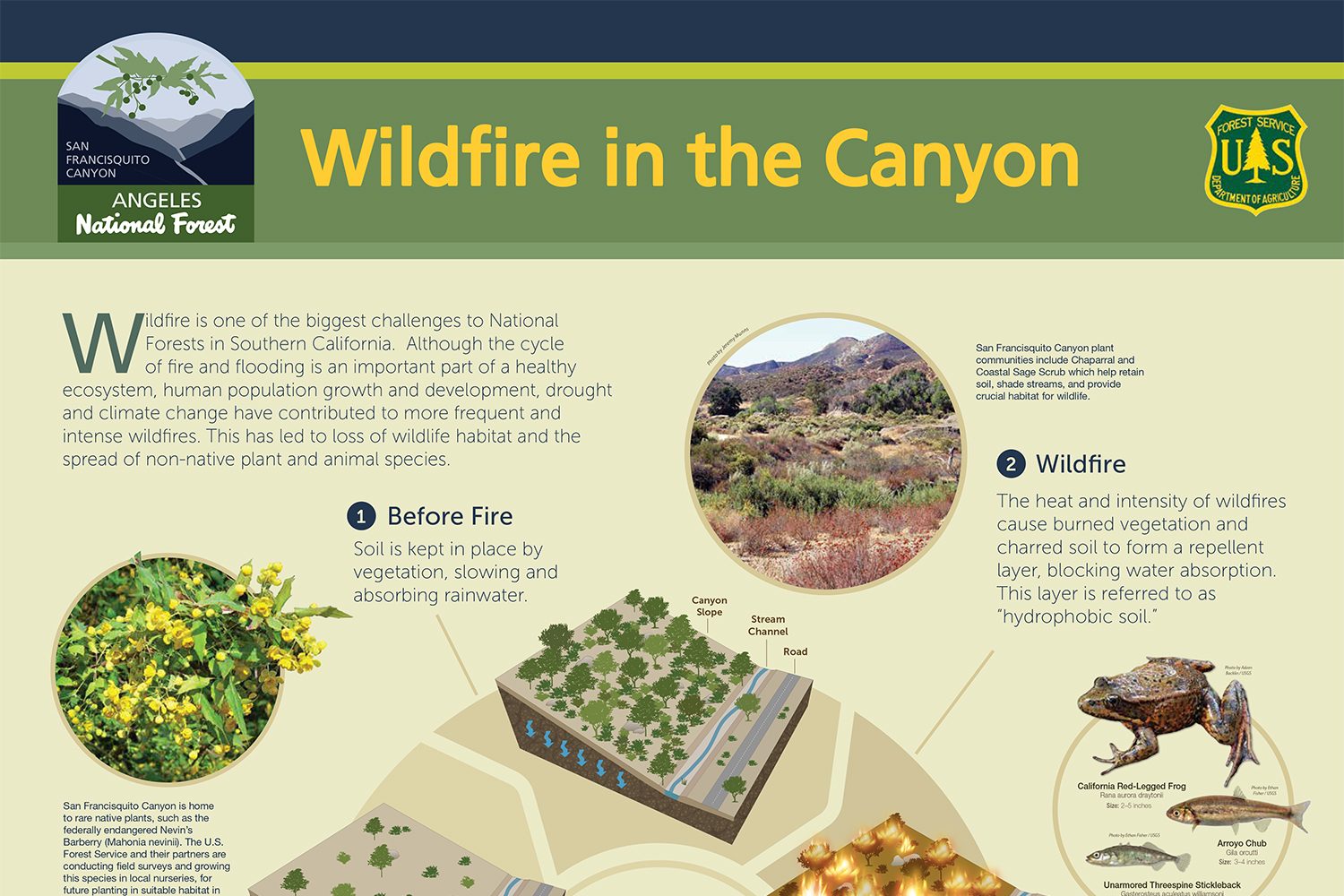 WILD FIRE IN THE CANYON